Hm... but let me complete another thing, they might record Players, IP used. I consider that firewall-ing them could be a good idea.
UncodeX Stuff
Not often maintained
My UT Mapping works...
Learn the rules like a pro, so you can break them like an artist.
- Pablo Picasso -
Top

anyone have ip of him? maybe i can find him in my logs and see if he has a history
Top

Hello, the cheater L.S.DREAM another nick is Hush, she played today just right now on server "a) 212.129.59.81:3000 "ComboGib -=(GRAPPLE)=- ][ www.Mediahost.gr", so it seems that she plays on all the 3 servers. Also many players were saying that she is cheating , and then she is ugly lying that she is not and she is telling you something like "spec first, before claiming such things", she just ugly cheats and ugly lies she does not.

This is just opinion but reporting cheaters on other servers and discussing them like this won't serve any purpose at all. Now you'll have current google searches of "cheater" and "HoF clan" going out to people just casually looking for a clan to play with.

If someone is cheating on HoF servers then deal with that but I'd suppress open discussion of other servers simply because there's nothing to be done. You can't depend on an ip to identify anyone any longer, vpn's are dirt cheap and very fast. Besides anyone with a little skill can join even an ACE protected server 10 times in a row and look like a different person every time.
I don’t wanna give the end away
but we’re gonna die one day
Top

If someone had the ip I could of looked up the person on our logs, names are hard to find because others use it as well.

However, I kind of agree, if this isnt hof servers, whats the point of discussing it here?

Another issue/glitch of the server, I've just experienced some odd multiple frozen-redeemer visual glitch just right now, so I've recored a demo (see the attachement), I also made a screenshoot before recording a demo: 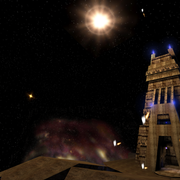 By the way...as seen, the another odd thing is firecracker's fun of getting the highest kills number vs bots: 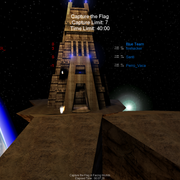 It all made my day.

She has just ruined a good game, just right now, on nick: >she<:

Added: This is really disgusting but now, another game has been ruined by 2 aimbotters in the same team (blue): HessyJames and >she< (>she< joined in the middle of the game):

As for HessyJames, I saw him before as a good daily player but not a cheater, I wonder whether he:
- just switched to cheat
- was cheating before but in a smarter less obvious way, and now switched to a full cheating "I don't care" mode
- or someone was impersonating/cloning him 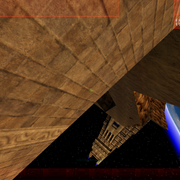 Added 4: aimbotter (pogatic) vs aimbotter (*Tears_Of_The_Sun*) lol I thought they are the same one person, but it seems two different cheaters lol...the most interesting and funny is that they have are both girl and have identical styles of play.wtf? Did she cloned herself or what...lol 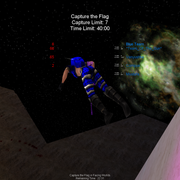 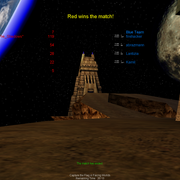 Added 6: Number of glitches in this game is uncountable, here is another one, one of the bots stucked and is dancing - watch the attached demorec file "bot stucked dancing glitch".

Hello guys, as seen I haven't been posting here over 50days to not spam the thread, alternativiely I've been editing my last post several times, but I decided to write one more as things have badly escalated - I've been playing almost every day on these 3 Grapple servers during these 50 days.

All the 3 servers are heavily plagued by many aimbotters 24h/day, which play every day in almost every game, the servers are unplayable due to them, often half of the players in a game are aimbotters, I rarely find a clean game without aimbotters, sometimes in a single game I find 4 or more aimbotters at once, I list here all aimbotters I met:


I don't remember every aimbotter's nickname, so if I recall any more, I will update the comment with new nicknames. Also aimbotters often change their nicknames after they've been catched cheating and sometimes also they're cloning someone's nicnkames, however at least half of aimbotters from the list don't change their nicknames, so you can just meet them playing on the servers every day.

No DEMO records attached, as at least half of them play on the 3 servers regularly and daily so you can just go, join and spectate these nicknames live on your own eyes and record demos...+ I was tired of breaking in a half of the game which makes the actual game wasted for me, then switching to a spectator and recording another cheater, too many of them, If i had to spend all my time recording aimbotters I wouldn't have time to play...OK I've actually had several demos but they've got lost when I removed UT99 from my PC yesterday as unplayable due to cheaters.

But the thing I've wanted to point out is:


Gonzales: admins of the server don't take any action against this ugly aimbotter...

Yes, exactly, I even sent an email to the admins at the time I created this thread - 07.03.2019 with a link to this thread + DEMO of L.S.SDREAM* aimbotter attached and ban request. Guess what - no reply ! Nor the aimbotter got banned !. No fair admin would allow his servers plagued with aimbotters...a clear conclusion arises:


Nelsona: As you see admins are trying to keep a TRASH alive, what they do there it's far from UT'99.

Yes, exactly, they want to get trash and fun with aimbotters + the servers's weird settings.

Therefore, due to the lack of reaction from the administration: not responding to emails with ban requests nor banning aimbotters, which is ugly and distgusting as for being an admin, I decided to threat the admins on the same level as aimbotters, the both are ugly motherfukin fools and scum of UT99, therefore I took matters into my own hands, therefore I started a multiple instances of the game running in the background - with different nicknames, and when ecnountering an aimbotter while in the game, I used the separate UT instances to join the actual game, and multiple vote-kick the aimbotter by using the multiple UT99 instances.

Guess what? After 3 days of removing aimbotters from games such way, suddenly...(take a deep breath now) the stupid admin suddenly woke up and reacted and...HE BANNED ME FOR... KICKING AIMBOTTERS FROM GAMES...AND NO ONE OF THE AIMBOTTERS HAVE BEEN BANNED...ME ONLY ! A FAIR PLAYER WHO FIGHT AGAINSt AIMBOTTERS BANNED ! BUT NO AIMBOTTERS BANNED... ! DO YOU BELIEVE OF THE MOTHER FUKIN TROLLISH SCUM ADMIN WHO RUNS THESE SERVERS BEHAVE LIK THIS? PROBALBY HE BEING ONE OF THE AIMBOTTERS OR HE MADE THESE SERVER TO LET THEIR FRIENDS USE AIMBOTS AND GEET FUN KILLING FAIR PLAYERS. 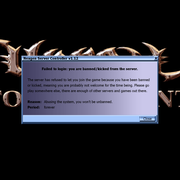 Does this mother fukin trollish scum admin asshole wanted to say that on his servers the rules are: KEEP AIMBOTTERS, REMOVE FAIR PLAYERS?? BUAHAHAHA.

So why after pressing F2 in his server it says - a FAKE message of the day: DON'T CHEAT??? BUAHAHAHAHAHA HE MUSt BE KIDDING...

1 Plagued by aimbotters, aimbotters are allowed and don't abuse the system, fair players are banned because they abuse the system while trying to kick aimbotters due to the admins lack of any kind of response.
2 Fake message of the day "DON't CHEAT" should be changed to "CHEATERS ALLOWED, FAIR PLAYERS UNWANTED, also "contact admins with emails"...FAKE too because noone reply...
3 Fake number of max players on the server (32,48,64)
4 Fake numbers of currently playing players (even if 0 or 1 player, it shows like 10 + players active)
(3 and 4 are to artificatty and unfairly bump the servers up on the main server list, so everyone will join here)
5 Bots steal nicknames of real players, how many times while in a spectator mode I saw bots have nickanmes of real players...and after joining the server my nickname has been changed to Player* becuase my clone-bot has been laready in the game....LOL
6 Bots steal messages of real players, how many times while in a game i saw my own or other player's message from several days ago
7 All the 3 servers are added to Favourites without permission - scum.

Nelsona: As you see admins are trying to keep a TRASH alive, what they do there it's far from UT'99.

TRUE !! Admins of all the 3 Grapple servers are mother fukin trolllish scum shiit cheaters, which allows cheaters on their servers, and harass fair players, please someone contact EPIC to ban all the 3 servers and remove from the masterserver list of UT99. PLEASE I CAN EVEN PAY YOU FOR THAT 50$ via PayPal.
Last edited by Gonzales on Sat Jan 18, 2020 2:58 pm, edited 24 times in total.
Top
Locked
86 posts