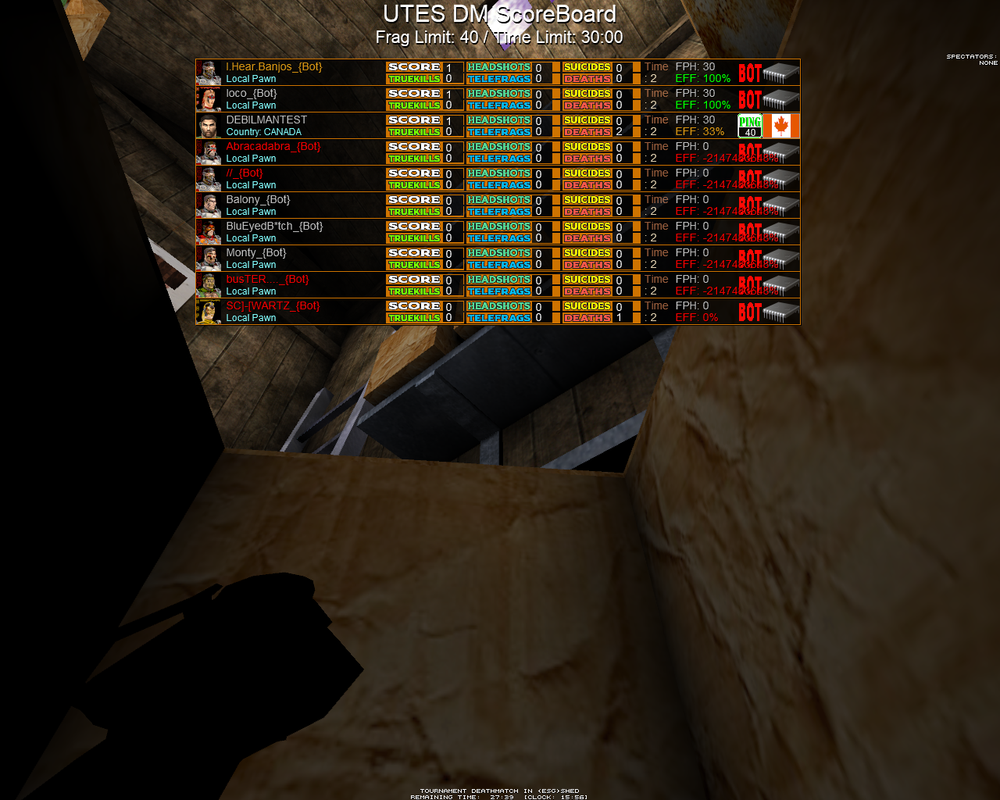 Thank you, it become better, i just re-read topic and remember: "Ha there where a times when such inconvenience was present". But not now - thank you.

I found several new inconveniences:
First: time for match to begin after new map loaded and players connected is unnatural long. It should be ~5 or 10 seconds shorter. People sitting and wasting their time while nothing happen. Some people even leave because they think server broken and game will never begin.
Second: there is too many bots. Even in big maps like Eagles Night it still to many bots. I stand in one place where is respawn dot and just kill bot and always bot respawn in same place. There is 10 bots now - this way to much! I think we should go to 6 bots - then it will be interesting - like at least you need spent some time to found bot and it could be dangerous for you. Right now you just stand in one place and shoot bots at respawn dot - this is boring and unnatural. 6 bots are enough.
Third: Nicks of bots is confusing and annoying. Why bots have names of active players like Balony and Abracadbra? I once played with both of them and Blue*eyed at the same time. It was superannoying cause i didn't knew where is bot and where is human. A lot of stress even now - you play and Balony kills you, and you like - "Allright Balony is here!" and then like - no, it just a bot. Please rename bots to neutral nicks. Human players have unique nicknames for a reason. Thus why bots should not have human players nicks so we can easily distinguish bots from alive players.
P.S. Problem with voting for one map and getting the other are still present and it happen regardless of what map you votes. I can suggest it is not tied to specific maps, just exist and happen often.
Top

Maps placed there are not my doing, they were already added by other direct admin in the past - UNTESTED and dropped there like the garbage from a truck.

Bots - this is not my doing as well, decision concerning Bots did not come from me, neither their numbers. If you want to figure how do I do Bots look at Monster Gaming Server - there are NON STOCK Bots because I don't like errors and what they do in their plain DM strategy. They aren't perfect yet, but are still suitable for what I'm expecting from a Bot - and using another type of DeathMatchGame and others as well. In other hand after entering the game, during first minute I Hit F1 key for figuring "who" is playing, definitely I can figure suffix and flag stuff. A "chip" shown as flag means A.I. not a human player - perhaps a Cyberdine Systems 101 prototype or whatever

. I wasn't confused at all at this point but... maybe it's just me... Their number... oh well... perhaps is too much in lousy maps, just saying... and their skill is under a worm skill in there, in that skill they move like a zombie, any player with 200 ping is wiping floors with them... because low skilled Bot is too predictable and way too slow...

Problem concerning Votes.
If your are voting a map without all required packages - like I said, I did not made the server this way - it's normal to have some skating based on null dependencies and those maps will never load or they affect other votes, MGS server has never failed any server-travel because every single map added there was tested if it loads or it doesn't load. Also MapVote in MGS is another version more polished - still not perfect. At a moment in UT it was a sudden addiction for MapVotes and community has produced more trash than good things - my opinion, yes, my opinions can be frustrating for lolzers but it's a reality which can be seen: update update update instead of a tested and stable version and stage it's the same for maps too, the mostly they are "alpha" maps but called "beta" and they are not even a beta version in terms of a software, being released with "known bugs" coming from map not from game which to me it's plain stupid.
I'll be hated more on more each time when I'm talking about things exactly as they are but... probably I don't care about these "spam people" and their "UT addiction".
UncodeX Stuff
Not often maintained
My UT Mapping works...
Learn the rules like a pro, so you can break them like an artist.
- Pablo Picasso -
Top
Post Reply
43 posts