All right, CTF-Gravija has now all logic required One-Way paths through gravity tubes. I think won't hurt some AlternatePaths, perhaps game is not that hard for human vs bots because... player can use gravity and translocator how wants and also crawling all sort of locations which would be a DevPath challenge by full filling map with nodes.
But we have a CTF with Bots here:


Now let me look at that BattleForIceNFire map.

Map Examination:
Initial report doesn't show major problems - maps it's inside Engine... but - excuse me - those are not paths to Flag. I'm not in charge to talk a lot, I'll allow MapGarbage to say what did it found.

In theory only two reachSpecs could bring some interest for Flags. In practice we do have wild areas without paths and I'm not really loving those PathNodes placed pretty higher over ground. I'm not curious about how do they help in game or not helping, but that's not what a Bot wants.

And... I think time has come for new stuff... Allow me to write something...
UncodeX Stuff
Not often maintained
My UT Mapping works...
Learn the rules like a pro, so you can break them like an artist.
- Pablo Picasso -
Top

You got any interest in trying to map a Shambler model onto a SkaarjBerserker? Thereby making a new monster for MH... 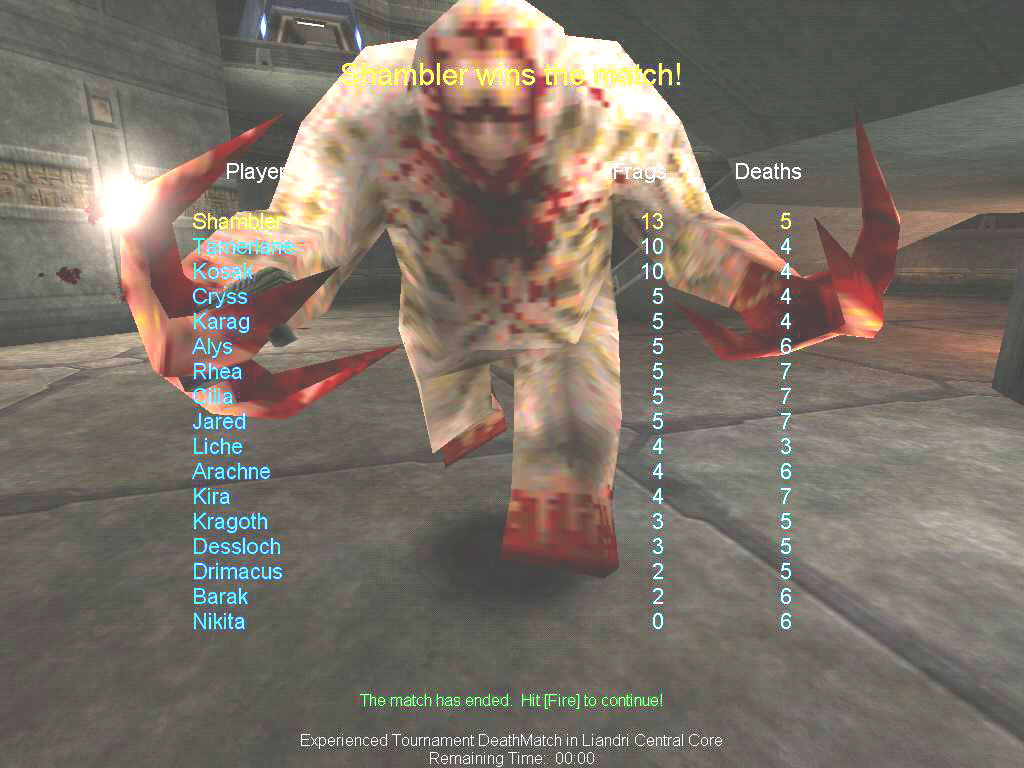 Usually I have a bit of interest for new stuff... but here it's about several factors that needs to be in account:
- package might be messed up in future or in the past with a FAKE duplicate copy;
- package might have a bad mismatch like Spinner (monster and Player/Bot) - two different things;
- package might have lousy codes like testing attitude for a variable-object instead of a pawn and/or original stock codes with zero fixes.

As a side effect, if I like such a creature I'm quickly importing it in MyLevel. Right there all bad things can be rewritten without calling or affecting versions insanity having no dependency with original package. It's what I did with more than one package which I used in a random map which will be the only download ON-Line and without versions pain.

Right now by example I have two things in a private package (custom InventorySpot and a custom teleporter) which has only a purpose - importing, and nothing else.

Checked:
These "shambler" are not mapping stuff, it has a Bot model (common Bot) and a Player model not a Monster... but I think it can be turned into a monster.
UncodeX Stuff
Not often maintained
My UT Mapping works...
Learn the rules like a pro, so you can break them like an artist.
- Pablo Picasso -
Top

Okay, this may present a challenge on all sorts of levels.

1) This is a small HIGHLY DETAILED map for RX, so it has no pathing.
2) The amount of detail slightly bogs down the memory.

Think you can do anything to this?

In 2020, even if is about an RX map, paths can be done because this way we can improve Bot Action. Like I said, We have a basic skeleton of RX CTF bot support and yes, old codes were... bullshit, all that SkyNet crap (coders looking there might figure what I'm talking about).

If you do have a map intended for RX and or not RX CTF such map should have double paths between Flags: Air paths - shorter length and ground paths for those losing plane and normal alternate attack. This is doable by anyone knowing UGold Editor and features which allow separate paths by declaring proscribed vs forced paths. If there is nobody wanting a challenge then... let me look at map and give me some time. I need to test first if Devs are supporting navigation...

Edit: At first check map has paths... split in pieces - plain stupid. PlayerStarts aren't connected at all. There are routes heading through a few bandages but the Bots entered in game cannot figure paths very quickly. For RX play we definitely need links and aerial paths.
Let's say that paths are not the big deal... As usual I cannot be more annoyed than when map has "_Fixed" suffix which demonstrates exactly the opposite: NOT READY and far from being fixed - I don't recall a mobile map after all

.
#1 - even plain paths are not done correctly - large areas are missing in pathing, only central roads have some paths linking those bandages...
#2 - collision problems - fake collisions ? What the heck is this bullshit ?

Trees are colliding actors in a bigger radius than they are visually designed. Any reason for this schizophrenia ?
UncodeX Stuff
Not often maintained
My UT Mapping works...
Learn the rules like a pro, so you can break them like an artist.
- Pablo Picasso -
Top

Careful, Terminators are gonna get you.

Nelsona wrote: ↑Fri Jul 17, 2020 7:14 pmTrees are colliding actors in a bigger radius than they are visually designed. Any reason for this schizophrenia?

This reminds me of a reverse to the complaint you made about the DarkForest MH map, because the trees weren't solid... but no, no idea why on this map.

Map is from the VulpineMisson forum. They have HUNDREDS of maps for RX, it's possible they consider it a skill thing to dodge between the trees while flying.

I understand the logic of hitting a tree but not understanding hitting a nothing nearby tree. These cylinders are TOO BIG. Such decorations won't have the best ever cylinders, that's why BlockAll actors can complete stage but here is just insanity. What for such dimensions instead of making them closer to the tree diameter ?
The rest is just a story, you can drive jet much over forest... Here will be added aerial paths anyway. But for the moment I'll inspect all trees...
In DarkForest was the reversal, a Titan throwing a rock initially invisible masked by a tree, was hitting you properly coming from leafs because monster could see you very well ignoring human eye occlusion. There I did not see any small attempt to clone a bit a real forest with all obstructions like in reality. To not mention that no one was trying to setup some triggers simulating a wood hit sound or some leafs noise when whatever thing was going through a plant... Certain decorations had attempts to sounds but... I don't recall more maps having a use of them.
UncodeX Stuff
Not often maintained
My UT Mapping works...
Learn the rules like a pro, so you can break them like an artist.
- Pablo Picasso -
Top

Okay, it looks like 563 reachSpecs are covering well map in big parts, map being an open space - Bots are not having visibility problem through trees. However, we do have an aerial route in case that any potential future RX Bots might have interest in flight more that in fighting and crushing - with the risk to ignore enemy. In other hand the stage here is a bloody thing, the show it's entertaining sustained by this natural atmosphere.

I gotta test this more for figuring if exist paths through trees, we need to prevent any blind movement which doesn't look good.

Have fun !
UncodeX Stuff
Not often maintained
My UT Mapping works...
Learn the rules like a pro, so you can break them like an artist.
- Pablo Picasso -
Top

As always, you are a miracle worker.

All workers are doing good things with... Tools - those are important. Without PathsLinker/MapGarbage I would spend here... days... or even more...

Note: I tested map a few times and... a single time I witnessed a capture for Blue team using... Jet.
UncodeX Stuff
Not often maintained
My UT Mapping works...
Learn the rules like a pro, so you can break them like an artist.
- Pablo Picasso -
Top
Post Reply
581 posts