just to be evil

just to be evil

by evilgrins
One of the first times I remember playing MonsterHunt online, poking around for random servers, it was on this map. A personal fave of mine, I've been playing around with it a bit here and there...

...and I went a little extra evil the other night.

So here it is: 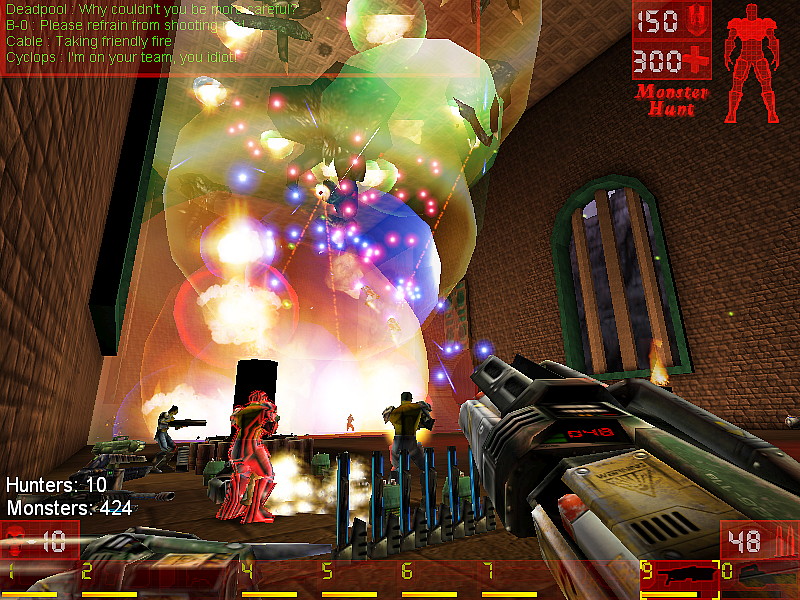 · Left most of the monsters as is, but I re-skinned them and altered their projectiles.
· Added 2 powerful monsters, removed 2 from the original setup.
· Removed an Unreal1 weapon that was on the map for its UT99 equivilent.
· Map has my fave redeemer on it, along with several standard.

by Nelsona
This "evil" is like a "lamb" for this case. You could be really evil and just fix PATHS here, because this map is supporting a complete MH game where Bots can finish map. At least if map doesn't have those "!!!" stupid signs, then it's fine...

by evilgrins
Bots do a decent job on this map backing the human player/players, but not much else beyond clearing the starting room really.

Nelsona wrote: ↑
Mon Feb 11, 2019 5:23 am
You could be really evil and just fix PATHS here, because this map is supporting a complete MH game where Bots can finish map

Not sure we're using the same definition of "evil".

Also not sure bots could actually finish this map regardless, from the boss to that little surprise at the end... doesn't seem likely.

But, by all means, if you'd like to fix the pathing and then let me know how long it took your bots to finish it.

by Nelsona
Explanations time:
If the end of the map is in a place where it is not possible to see Bots, some of "DarkForest" map scheme applies with a false ending in a near-ending area, at least we get them to help in the last room even if they are not called.
For the stairs-type side we have LE-LC-LE combinations that work without any problems. Since 2017 all support for preventing a map-rush from Bots can be done properly.
Bot Support is doable guaranteed... Too bad for lack of interest...

As a note: I might solve some Bot Support here (I think I have already such a version if I'm not mistaking) and pointing pathing tutorial here for samples in order to show the "How To" else I don't know how to show some decent paths not hyper optimized but better than nothing.

Note: LOL - it looks very similar with what I was pathing but... is missing a PathNode closer to End for distraction and some objectives protected. Also a protection at teleporters would be a charm, job is done already 90%...

Edit:
Nah... End of discussion.. Log is full of crap

I'm not interested to fix sh!t mods which others are doing, but maybe removing them in future...

Currently got my eye on about 15 maps I wanna edit, I'll let you know if one of them is something you might wanna take a crack at.

Actually, I can think of 1 specific but it's in a post on another forum...

by Nelsona
For clarification after inspecting map and even having some Bot party (fully doable), let's see what I won't use this in servers under my maintenance:
- That redeemer looks as n00b work based on copy paste - by any matter we do not have any ANIMATION for sprite actors like that projectile - that's just fake coding;
- monster with stripped code (like it's perfect) is a hard task for fixing in a conformed package (some resources are needed) unless we are serving community with a mismatch.
In this stage for me this is a default no go, I'm not interested to fill mapvote's columns with low quality works.

Bot support done in raw format might have a problem because of Teleporter(/s) used as shortcut(/s) - Bot will attempt those routes, they have to be locked like in SkaarjTower map or BlockedPath is required instead of covering map with paths and doing dumb A.I. behavior - or simply adding them AFTER pathing (this way works as well). I don't know who did those paths but is NOT enough.

I have to admit by removing all junks out of map, it might be a good ground for learning Bot Support.
All times are UTC
Page 1 of 1
Powered by phpBB® Forum Software © phpBB Limited
https://www.phpbb.com/