Anyway, UT99 is a great game but it's almost a dead game, it's a 20 years old game, there is just a bunch of players left who still play it, they are about 100 players (in the game's browser u can see over 200 but actually a half of it are just bots).
Top

These are "admins" - they are trying harder to demonstrate a FAKE interest (oh, look, we do have players...) for this game, but actually only a few people are working/trying to really do something... Others are sudden "fresh" admins having no clue what does that means a Server, but they do servers... Quality it's no longer a goal, I wrote that MapGarbage helping me to do a quick examination to "maps" - released files more exactly. In whatever beta4 shared I see zones mixed, zone actors placed in void, paths are far from a good optimization, and so on. Why would I waste time with these ? I'd rather prefer to play what I like ignoring this junks-spread addiction. These are sad moments at this time but... I'm playing UT more or less privately - if I'm at home without other business (I'm trying to recover ALL my phone terminals more or less damaged as software).

A self conclusion:
The loss of quality = The loss of players - and this cannot be denied regarding to what those "geniuses" are trying to demonstrate, because if servers are full of dumb things, players are not that happy as supposed regarding to what they say...
Not often maintained
My UT Mapping works...
Learn the rules like a pro, so you can break them like an artist.
- Pablo Picasso -
Top

As seen in this post: viewtopic.php?p=1533#p1533 I maintain a list of botters in UT99 GRAPPLE servers, as an additional proof, yesterday while playing in:

I saw a short conversation between the botters:


DonkeY: you liked that cover didnt you dark
DarkAngel: Donkey... your bot works here??
DonkeY: sure

I made a screenshoot: 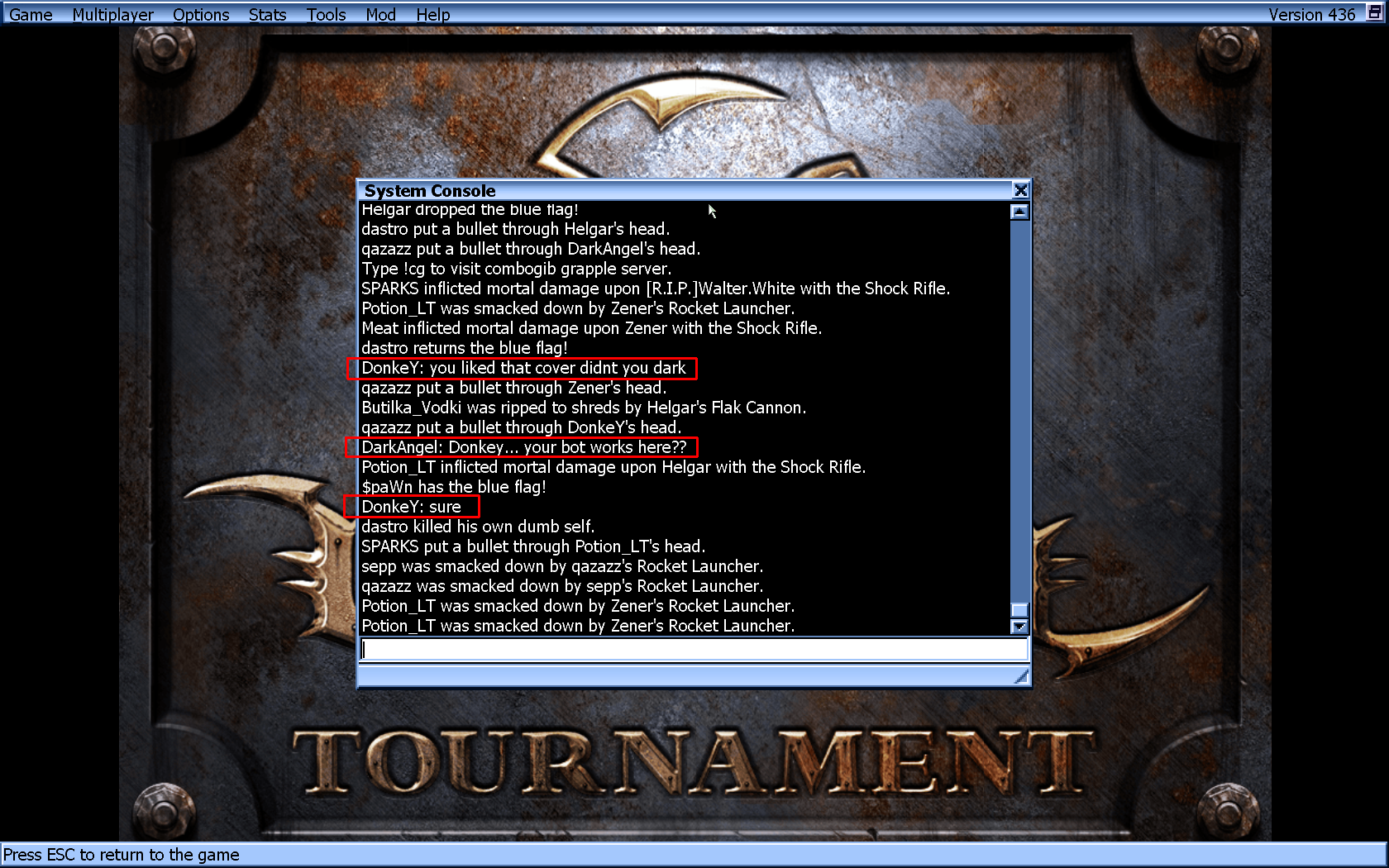 By the way, since like a week or so, every day, after every game, botters aggressively try to vote-kick me, and sometimes insult me, most of the time they have no enought votes to kick me out, but sometimes (like yesterday and several times in the past) they have been numerous enough, so I have been vote-kicked from the server, hopefully mostly they vote-kick me after game, so I can join the next game, but it happened in the past, several times that I have been vote-kicked in the middle of the game, summarising their behaviour: botting, insulting / trying to ridicule, vote-kicking, wasting a game, defending each other. The short summary: SCUM.
Top

Right now I don't know why Darkelarious/Epic did not stop to show those servers in browsers since cheating and making a mess with UT is even restricted in EULA but... perhaps it's time to blow up the full of shit toilette and I did not figure this yet. What they do it's not how this community should work.
Not often maintained
My UT Mapping works...
Learn the rules like a pro, so you can break them like an artist.
- Pablo Picasso -
Top

Last day or so, I saw "organner" botter being vote-kicked from the Fast Smoking Grapple server, and then he returned a minute later, what means he bypassed a vote-kick somehow...

From first Screenshot I can read first line: Welcome everyone !
Good,... which means that we need to build a "team", everyone loaded with some Helios or Zelius Bot and let's have a party if that's the purpose of such servers where no one takes measures or do cares about that environment... just saying...
Not often maintained
My UT Mapping works...
Learn the rules like a pro, so you can break them like an artist.
- Pablo Picasso -
Top

I did some investigation in the past, I tried these in the past and none worked on Grapple servers, moreover I tried all public available cheats and none work on Grapple servers, all being obsolete thus detected by ACE, my question is: since there are so many botters on Grapple servers, I wonder whether all of these botters use a free aimbot somewhere on the internet, or a paid aimbot, it just doesn't make a sense for me that there is so many botters using paid aimbots, do you believe that half of players on Grapple servers pay for their aimbots? I don't think so. Either the cheaters share the cracked aimbot between themselves only so they keep it privately, or the aimbot can be found somewhere to download after deep searching uncle Google...
Top

I don't think all of them are paying, definitely one of them or a few might distribute these for free using more or less private solutions. By example, I know sites from where you can download various applications more or less hacked/cracked/cleaned and Earth did not exploded so far. Money makers from such stunts have their loss too.
In other way if they do not have ACE i think it's easily to screw something in client for getting advantage in game in front of others and with a bit of skill you can earn a higher score without even to be suspected - but I prefer to not speak about idea because... it will be used then, reading forum is available for interested people even if some of them are not reading anything...
Not often maintained
My UT Mapping works...
Learn the rules like a pro, so you can break them like an artist.
- Pablo Picasso -
Top

1) Updated list of botters: viewtopic.php?p=1533#p1533 - so many of them
2) Found another 2 trash-servers full of aimbotters:
a) --- ComboGib CTF (Grapple Hook) -- London --- 139.162.235.20:7777, admin: negruler
b) ComboGib >GRAPPLE< Server <//UrS//> 50.3.71.234:7777, admin: Sp0ngeb0b (<//UrS//>Sp0ngeb0b) what is funny - the admin is from <//UrS//> clan and he regulary plays on the server with aimbotters, also from his own clan like aimbotter <//UrS//>Anaconda, I played already several games on this server in several days, today while in a game when I started to talk in in-game chat about the sad fact that the server is just another trash-server full of aimbotters, and why <//UrS//>Anaconda haven't been banned yet, I heard the answer I was expecting: one of his team mate begun to support and defend the botter lying that Anaconda is not a cheater etc, classical bullshit and liying described here: viewtopic.php?p=1607#p1607, cheaters and their friends want everybody else to believe their bullshit that they are not botters but just skilled players, so that the other players will keep playing with them unconsciously thinking they (botters) are just skilled players. Also the admin advertise his trash-server at ut99.org: https://ut99.org/viewtopic.php?f=33&t=13621

UT99 is unplayable due to botters, and admins don't ban botters, which means they are trash-admins and don't care or they intentionally support botters by not banning them, which makes UT99 filled with trash-servers and unplayable, most probably due to the game being so old and dead (~100 population players online count) nobody cares anymore about aimbotters, as they make servers more populated, and everybody getting last fun with a dead game.
Last edited by Gonzales on Tue Jan 07, 2020 3:59 pm, edited 3 times in total.
Top

In fairness to admins it's very, VERY hard to ban someone from joining a public server. VPN's are super cheap (I'm using one as I type this) and we still don't have a way to verify players identification that hasn't been bypassed. I think that's why you seem to think that no one cares....Trust me my friend, there are a lot of people that care and many of them are on this board. Dealing with cheaters is a constant topic among the server owners and the mod developers.

Until a rock-solid way of flagging players exists, something along the lines of a CD key or serial number, cheaters are just going to have the upper hand. It sucks but that's just how it is and how it looks like it's just going to be as far as public play is concerned.

Edit: I probably should explain better....If you run a server and it is public-facing and you want to ban me from it you simply will not be able to do it. I can go around any method you can employ to try to prevent me from getting on. Some ways take a little work but nothing motivates a cheater/griefer like a door that is closed to them.
I don’t wanna give the end away
but we’re gonna die one day
Top
Locked
86 posts